Movie Review: King Arthur The Legend of the Sword 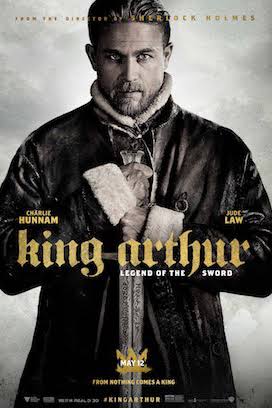 King Arthur: Legend of the Sword

This is a “bait and switch” movie where the switch is not played on any of the characters, but on the viewers.  One might expect from the title and the marketing, that this is an updated version of the Arthurian legend.  It is not.  Aside from the names and the presence of a magic sword in a stone, this story is nothing to do with the King Arthur you know.  Seriously.  Put it out of your head.  You’ll enjoy it better that way.

Once you get past the confusing realisation that this is not really a King Arthur story, the movie itself is a reasonable B grade fantasy movie with decent special effects and a couple of surprising actors in the lead roles.  Jude Law plays the villainous mage usurper and Charlie Hunnam is the character known as Arthur – in this imagining, a brothel-running street tough who should be king.

Watch out for Katie McGrath, who played Morgana in the more successful updating of the Camelot story, Merlin and is currently seen as a Luthor in Supergirl.

The storytelling is a bit jumbled in places and the style of the film is jarringly modern in a lot of ways but despite that, it’s a bit of harmless fun.  There are some interesting set choices and fun chase and fight scenes.  Go in expecting a B grade sword and sorcery flick and you’ll be satisfied.