How NOT to Review a Book

How NOT to Review a Book 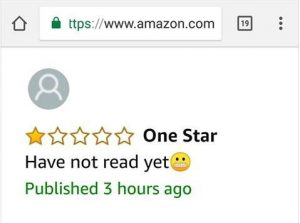 We’ve all seen them.  The reviews that say MUCH more about the reviewer than they do the book. They’re often mean and unfair, sometimes funny, and frequently the subject of much eye-rolling.  They’re generally accompanied by a one-star rating the book doesn’t really deserve and they usually fall into one of a few categories.

Don’t get me wrong – authors want you to review their work and it’s important to be honest when you do but there are definitely reviewing traps.  You don’t want to be THAT GUY who is really reviewing himself and not the book and having a bit of self awareness will help a reviewer avoid these traps.

“This was too much like a romance novel” – on a paranormal romance.

“This books was too violent” – on a zombie apocalypse novel.

“Too much homosexuality” – on a gay erotica.

“Too short” – when the page length is clearly stated.

Some people seem to pick books that inherently don’t suit them and then complain about it.  Authors do try to make it clear what you’re getting in terms of genre, length, etc but there are those who just aren’t paying attention.  It’s easy to look like an idiot posting this sort of review.  I’ve seen gay and erotica authors promote one star reviews of this type to their intended audience as a way to get more sales and if you’re the reviewer who comes off looking like a backwater prude who couldn’t read a description before they hit the purchase button, that’s embarrassing.

Avoid this trap by making sure you always review a book with its intended audience and genre in mind.  A review should judge the book for its quality within the intended arena in which it belongs.  That’s not to say you can’t have preferences but giving a bad review to a book because it meets the criteria for its subgenre is unfair and just makes you look silly.

Also, if you don’t like a particular type of book, just don’t buy it.  Seems obvious really.

“The main character has a turtle for a pet and that’s morally wrong!” – Okay, I made that one up but you get the idea.

Sometimes a reader has a particular bee in their bonnet and gives an especially bad review because the book features this thing.  It’s normal for us all to have things we especially don’t like or trigger us in some way because of our personal history.  Sometimes over used tropes and stereotypes are incredibly annoying and factor into the rating and that’s fair.  Sometimes though, a particular pet peeve has an impact on the rating that is completely out of proportion and the reviewer throws out the baby with the bathwater, giving an otherwise good book one star.

Avoid this trap by being aware of your pet peeves and not giving them undue weighting in your review.  It’s fine not to want to read about a topic that upsets you but it’s unrealistic and unfair to expect the world’s storytellers to censor themselves to suit your preference.  By all means mention what you didn’t like and knock the rating down a star if you felt that strongly, but don’t take it all the way to one star based on your pet peeve alone.  If it’s an otherwise quality book that happens to trigger your particular peeve, say that.

“The writer is a moron whose parents AND GRANDPARENTS must have been cousins!”

“This book is an illiterate turd that a monkey could have pooped better.” – I made these ones up too because I don’t like reading people being mean to each other but we’ve all seen similar reviews.

There are certainly books that deserve a one star but a review that is actively cruel makes the reviewer look like a troll with a sore head and an inferiority complex.  It’s easy to be nasty in the privacy of your home but there are real people who put their heart and soul into these works.  Turning a review into a personal attack is a dick move.  If you’re giving a harsh review, be sure to be clear and specific as to why and not just harsh for the sake of being mean.

Avoid this trap by trying to find at least one positive thing to say about a book you’re reviewing and by sticking to the topic at hand – you’re reviewing the book, not the author’s personal life, looks, or whether their IQ is greater than their age.  Before you post, read it as if it was aimed at you…and if you’re still okay with it, post away.

“Plants can’t grow without human intervention.” –  on a zombie apocalypse where there nature had done its thing.

A good writer has done their research and sometimes has to walk a line between what’s real, what’s believable, and what fits with the story.  Diana Gabaldon once worried that her witch burnings were a few years out of date until it was pointed out that she was already writing a story about time travel.  It’s okay to be a stickler for facts but when a reviewer attacks a book for an error and the reviewer is wrong…well there’s egg on someone’s face.  Looking like a know-it-all is unattractive when you’re wrong!

Avoid this trap by making sure you’re actually correct about any factual errors you call a book out on.  It’s easy to check before letting the world know you’re misinformed.  Or, if it’s minor, maybe let suspension of disbelief work its magic and enjoy the story.

“I’m rating this with a number to remind myself what order I want to read it in.” – Yep, apparently people do that.

“I bought the Kindle version but I don’t have Kindle.” – Well that’s between you and Amazon and not really about the book, is it?

Some reviews just look like they could have been written in the throws of dementia.  These ones show that the reviewer hasn’t really grasped the point of posting a review.

Avoid this trap by staying focused on the purpose of a review.  It’s about the quality of the book and whether you enjoyed it –  so if you’re not talking about that, you’re not reviewing.

Above all, do post reviews!  It can be as simple as a star rating and a few words.  Don’t be put off by the traps!  Reviewing honestly and respectfully is one of the best things you can do for today’s publishing industry and it really is simple.  If you’d like some ideas for how to create a valuable review, check out my blog post on the subject.

One thought on “How NOT to Review a Book”